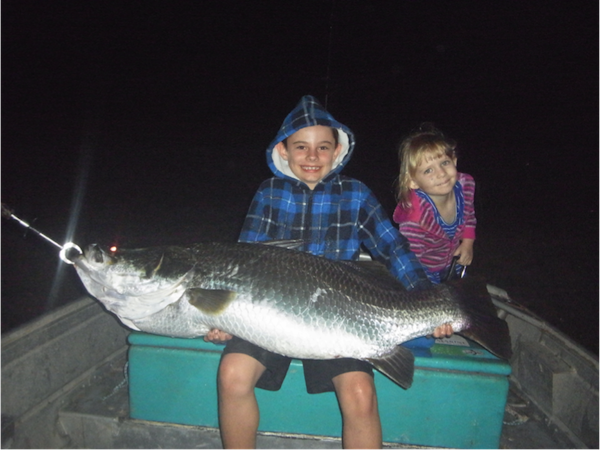 How do you measure the success of stocking fish? There are many ways of doing this but one of the cheapest ways is to tag them. In recent years many of the stocking groups have been stocking Barramundi at around 200mm and tagging them all, or at least part of the batch of released fish. In the Cairns area they have been stocking tagged fish in Lake Tinaroo and Trinity Inlet since 2002. Fish in Tinaroo have been recaptured up to 10 years later and from Trinity Inlet up to 7 years later. The fish in the photo was the first fish recaptured that had grown over 1m since tagging. Tagged and stocked in Tinaroo in Oct 2003 at 260mm it was recaptured in Apr 2014 at 1270mm with tag still intact!

Want more details? You can download the latest Suntag report “Tagging Stocked Fish in the Cairns Area 2002-2013” from http://info-fish.net/suntag/tagging-stocked-fish-in-the-cairns-area/