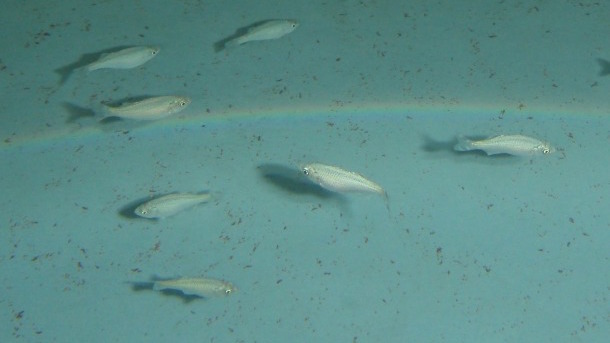 When we recently hosted Dr Michael Hutchinson for his presentation on Jungle Perch Recovery I expected  a lot of facts and figures, what I didn’t expect was a lesson in fish psychology.

It seems that Jungle Perch raised in captivity do not have a natural aversion to predators such as a big hungry mangrove jack.  So how do you teach a Jungle Perch fingerling that that big thing with teeth is not your friend?

There are pheromones in the skins of Jungle Perch that act as a warning marker of danger.  They are assumedly released in the flight process but it turns out that skinning the fish also releases that pheromone.  So in order to train the fingerlings some of their brothers and sisters needed to die.  The scientists would kill some of the fingerlings then skin them and put the skins in with the predators.  That was enough to trigger the release of the pheromones and from there it’s guilt by association.  The fingerlings put together the warning signal with the thing with big teeth and head in the other direction.   It seems that even in death, the fingerlings contributed to the survival of the group.

Nature is not for the feint of heart.

This fact triggered a whole range of questions for me.  How does this work in the wild?  Does this mean that other species have a similar pheromone?  Are other species aware of the pheromones, in other words does that release of pheromones actually attract predators?  What sort of range does that pheromone work over?  If there are pheromones for warning signals, what other pheromones are there?  Could we in fact use this mechanism in some way in the wild?

As rec fishers we rely on observation to understand the fish we target.  This small diversion during the presentation demonstrated that there is a whole lot more going on in nature than we can observe simply by trial and error.  Nature has worked out some pretty clever ways to get around problems.  I have to say this opened up a lot of questions for me and demonstrated that we still have a long way to go in really understanding our fisheries.

That is why we as fishers need to keep asking questions and collecting data.